The conference CoHousing Here was organised by SOA (Self Organised Architecture) from 14 to 15 June. Its purpose was to discuss resident-led housing, community initiatives, and issues of affordability – in the context of current circumstances in Ireland – in relation to finance, land values, and land provision.

Cohousing describes a situation where a group of people collaborate and coordinate in order to arrange the design and construction of their own homes. Such schemes typically combine private accommodation with various types of communal space. It is democratic and non-speculative, offering a viable alternative to one-size-fits-all, top-down methods of housing provision. Cooperative approaches to housing are still perceived as radical in Ireland, despite the legacy of Horace Plunkett’s cooperative movement (which, at its height in 1914, reached a membership of ninety thousand) and the prevalence of cooperative housing projects in other European countries. 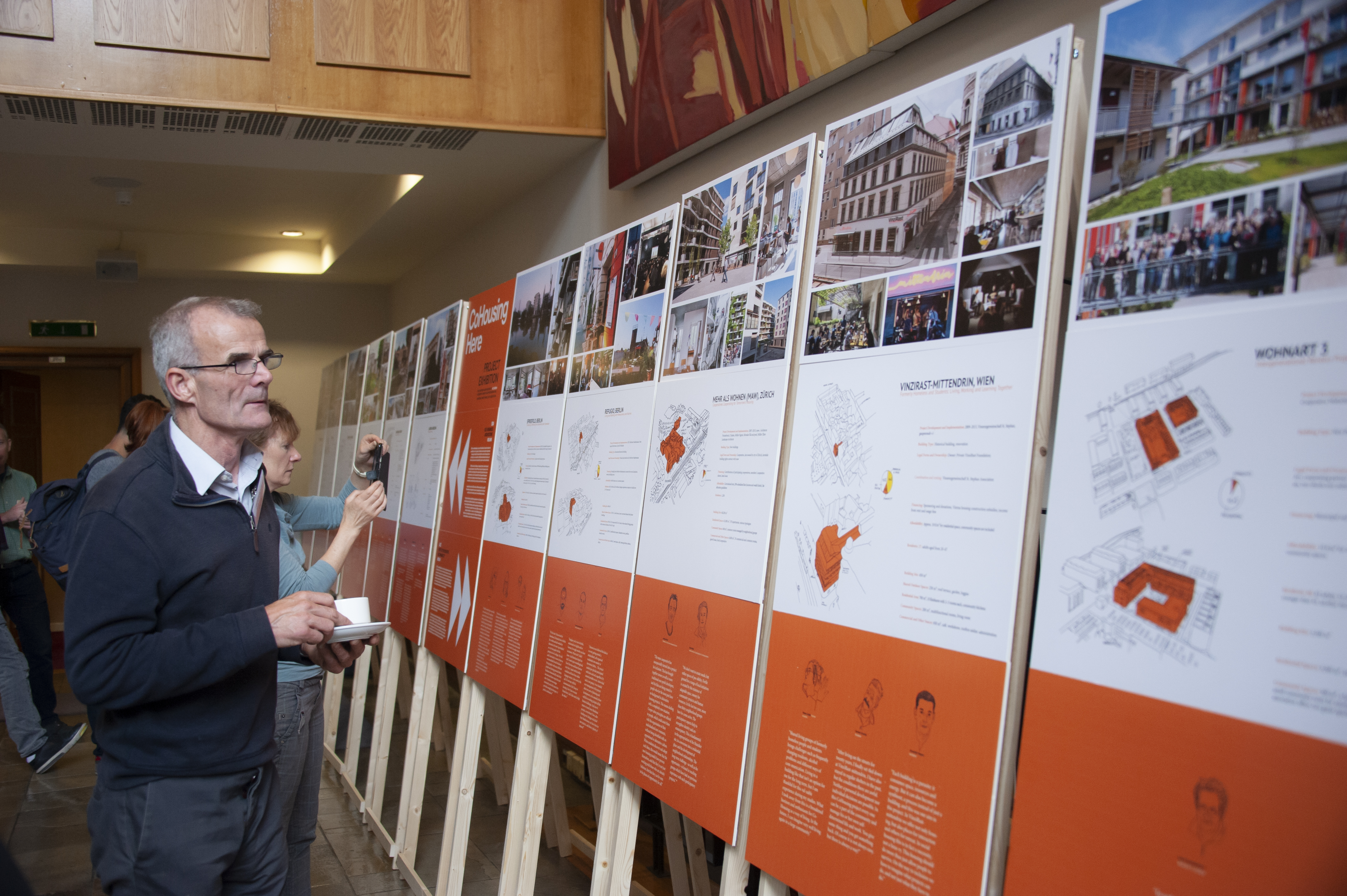 The first day of the conference, in Dublin Castle, consisted of lectures and panel discussions. International speakers presented exciting and successful projects: Dr Michael LaFond on id22 and Spreefeld CoHousing in Berlin; Geert de Pauw in Brussels (Community Land Trust Bruxelles); and Jacqueline Tellinga (Amsterdam) on cooperative urban development as policy. There were UK examples too, with Temitope Moses (Greater London Authority) on the grants being made available to the GLA under their current mayor and Stephen Hill from the National Community Land Trust Network.

The final session involved an Irish response, including a trailblazing presentation by architect Rosie Webb (Limerick City and County Council). The question of the day, however, was put to John Coleman (CEO, Land Development Agency): ‘Why have 30% affordable housing? Is this not a once-in-a-lifetime opportunity for 90% affordable?’ Underlying this query is the urgent need to think more critically and act more progressively while we have the chance to do so. 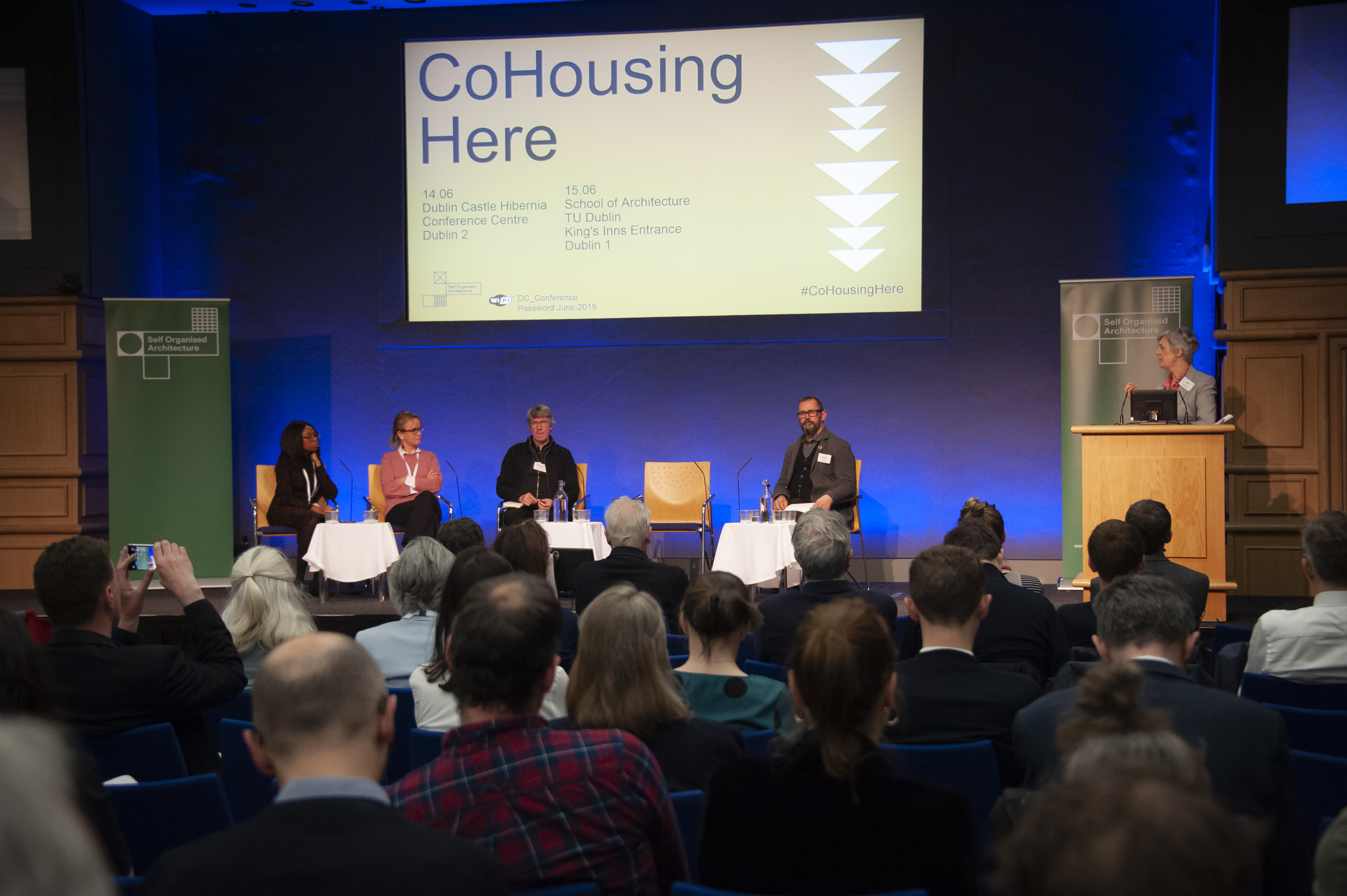 The second day of the conference was less presentation-focused than the first, instead combining two lecture sessions with two workshop sessions where themes could be explored in further detail. The morning series of talks, ‘Why Co-Housing?’, included Maria Brenton from Older Women’s Co-Housing in London, who outlined a recently completed project of affordable, dignified homes initiated by and provided for older ladies. Architect Inka Drohn is an expert in participative design and spoke about her recent projects in Berlin where the architect becomes a facilitator as opposed to a top-down designer. This is welcome in an Irish context where there remains opportunities for improvement in terms of how we, as building professionals, engage with communities. In the workshop on participation, Dougal Sheridan (LiD Architecture) presented a series of board games that the practice has developed which allow both commissioners and end users of buildings to collectively explore opportunities and make design decisions. A particularly positive example of good practice.

The workshop sessions allowed a multitude of voices to be heard and ideas to be exchanged. A synopsis of these were presented back to attendees and, in this way, everyone felt engaged and listened too while it seemed that new knowledge was created. The sense that a participative method can work (and not just in relation to housing) was itself evidenced in the inclusive model adopted by the conference organisers. 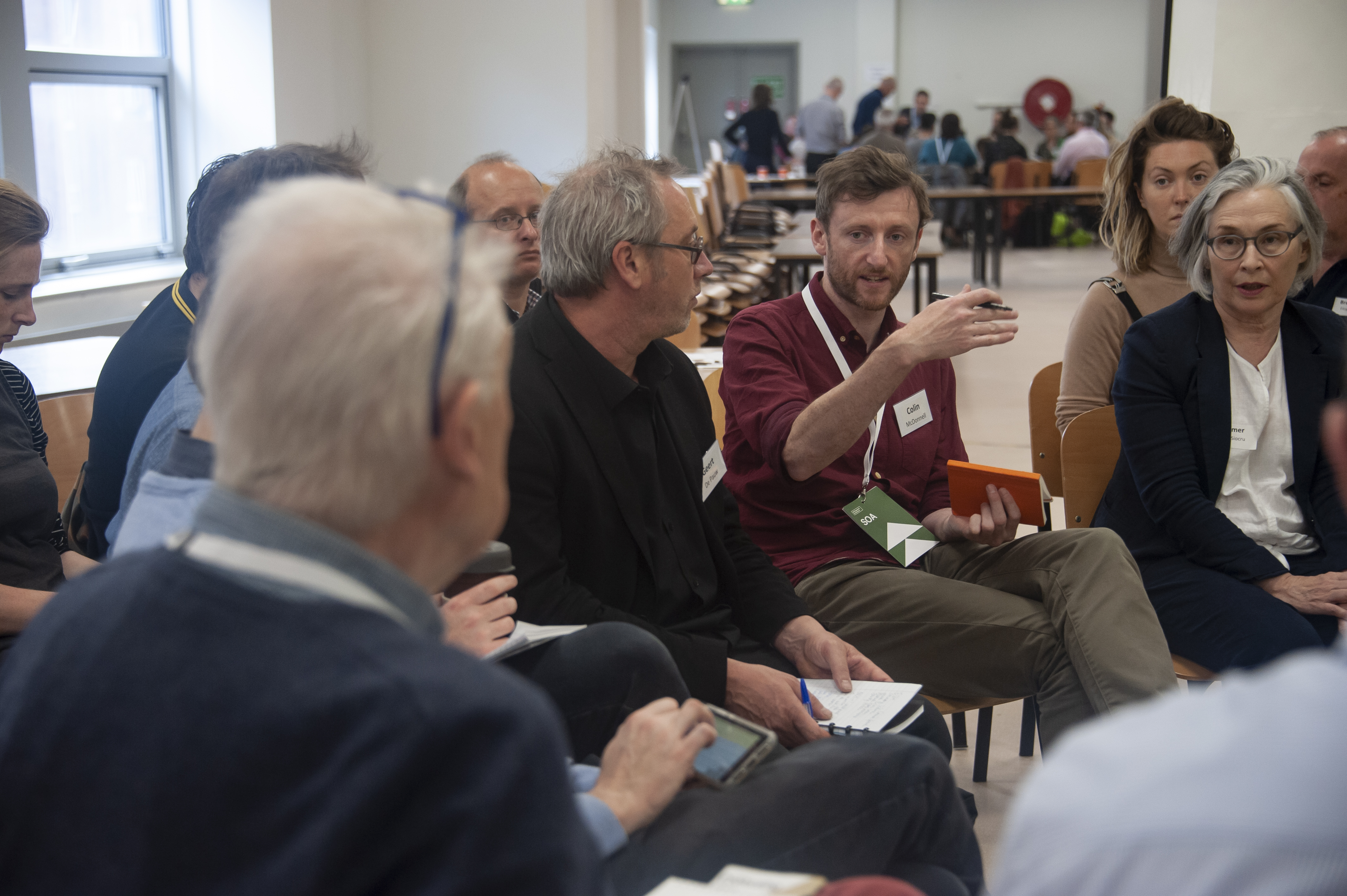 The event was a housing forum that really felt like it was tackling issues around affordability, collective organisation, and design in exciting yet internationally tried and tested ways. Co-housing has a proven record of providing affordable homes, in addition to supporting strong communities; an assuredly welcome outcome to those who believe in an empowered society.

After he published L’Esprit nouveau, Le Corbusier produced an agitprop pamphlet, Architecture ou révolution, with the famous warning: ‘the housing crisis will lead to the revolution. Worry about housing.’

For those addicted to current relationships between property, power, and capital, the ideas presented during this conference represent a threat. The opportunity has been provided to create a functioning housing system ordered by the market, tempered by the planning system, and fuelled by tax incentives. This logic has failed. It is time for Irish society to be open to positive, radical alternatives.

The crisis in the supply of housing (and indeed the challenges of climate change) must be addressed, and architects can play a central role in a paradigm shift regarding how we design, make, and sustain our built environment. Co-housing here could be one approach to help us do just that. 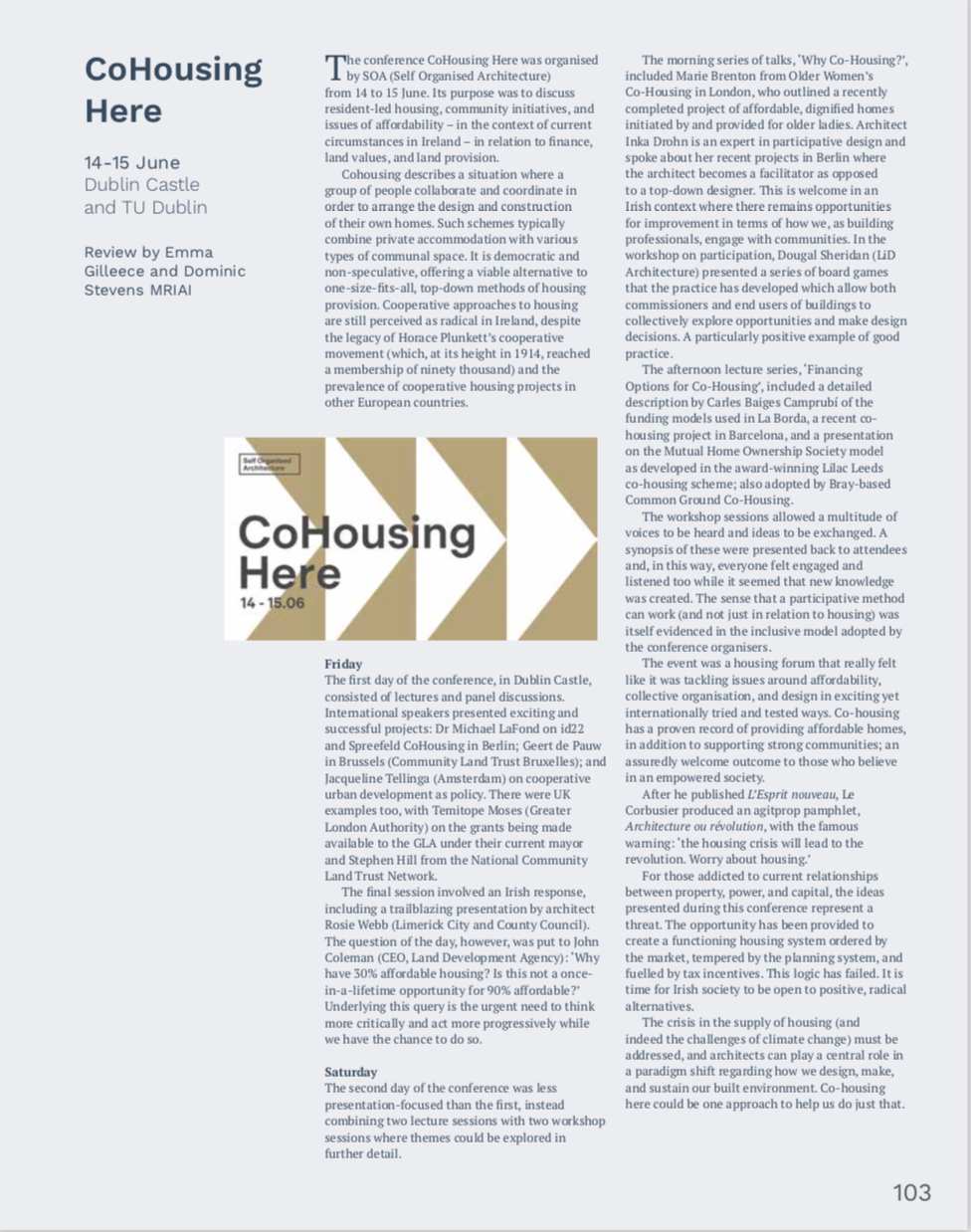 We use cookies to ensure that we give you the best experience on our website. If you continue to use this site we will assume that you are happy with this.OkPrivacy policy